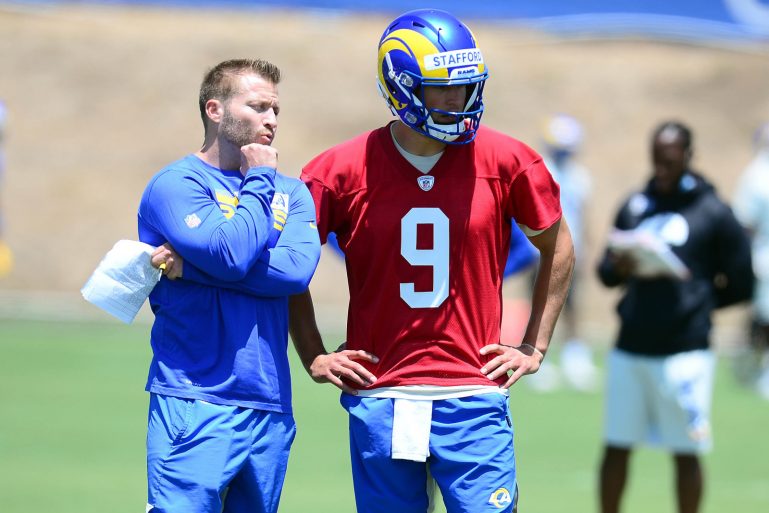 In the NFC edition of our NFL power rankings, we look at the Tampa Bay Buccaneers and the Los Angeles Rams as atop the leaderboard.

Name five Falcons. Marcus Mariota, Kyle Pitts, Drake London and … Atlanta is in the middle of a full-fledged rebuild, and it shows.

Seattle is trying to figure out whether to start Drew Lock or Geno Smith under center. That says it all.

The Bears are hoping Justin Fields can step up in his second year as Chicago’s signal-caller, but what around him will help the cause?

New York is trying to get a new regime off the ground with head coach Brian Daboll. It’s early success will depend on how quarterback Daniel Jones plays.

This could be a fun year for the Lions, who are in their second season under head coach Dan Campbell. Can the young kids step up?

Carolina is in its third season under head coach Matt Rhule, and little progress has been made. Is this the time with Baker Mayfield now behind center?

Washington is another NFC team with a new quarterback, it with Carson Wentz. The Commanders are hopeful Wentz can get them back to the playoffs.

The Cardinals have had a turbulent offseason. Now they must hope the departures of edge rusher Chandler Jones and receiver Christian Kirk don’t sink them.

Nobody is talking about the Saints, but they have one of the best rosters in the league. So why rank them eighth? Jameis Winston has plenty to prove.

Minnesota also has a talented roster,  but the results haven’t been there. Will a new head coach in Kevin O’Connell be the right answer?

Nobody had a better offseason than the Eagles. Now with a loaded roster supporting him, how great can third-year quarterback Jalen Hurts be?

Is this the year Dallas gets back to the conference title game for the first time since 1995? Long road.

Trey Lance will determine the floor — and ceiling — of the Niners in 2022.

Nobody is talking about Green Bay’s defense, but few teams have more talent on any one unit than the Packers on that side of the ball.

The defending champions are loaded once more, but the elbow ailment with Matthew Stafford is at least mildly concerning.

Somehow, at 45 years old, Tom Brady is a favorite to win a Super Bowl.