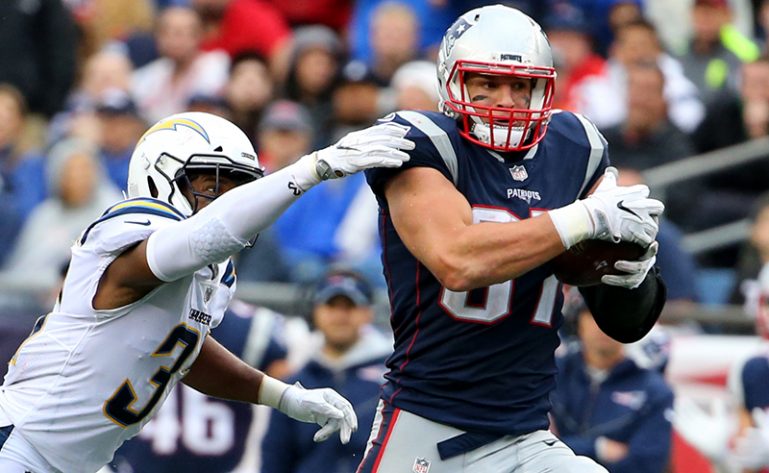 Should Rob Gronkowski decide to retire after his 11th NFL season, he’d be doing so as possibly the greatest tight end of all time.

Others have arguments to being called the NFL’s all-time greatest tight end, but Rob Gronkowski would be right there.

While Gronkowski doesn’t lead the position in touchdowns (Antonio Gates, 116), receptions (Tony Gonzalez, 1,325) or receiving yardage (Gonzalez, 15,127), nobody has ever played the position more completely, and been more dominant.

In his 11 seasons — nine with the New England Patriots before two with the Tampa Bay Buccaneers — Gronkowski has been an elite blocker to go with 9,286 yards and 92 touchdowns. He’s made five Pro Bowls, been named a four-time First-Team All-Pro, won four Super Bowls and was named to the 2010s All-Decade Team.

Whether he retires or not remains to be seen, although Gronkowski told TMZ that if forced to decide today, he would walk away.

So who else would have an argument alongside Gronkowski? Of current players, Kansas City Chiefs’ star Travis Kelce is in the conversation. Kelce is vying for his second title and third Super Bowl appearance. He’s already posted more 1,000-yard seasons (6-4) while notching 9,006 yards but only 57 touchdowns. Kelce was also on the 2010s All-Decade Team behind Gronkowski on the Second Team. However, with seven Pro Bowls and three First-Team All-Pro trips, he’s in the mix.

For the retired guys, it’s Antonio Gates and Tony Gonzalez. Both Gates and Gonzalez have more catches, yards and touchdowns, but neither were strong blockers and from a title standpoint, neither ever reached a Super Bowl let alone won any.

Perhaps Gronkowski comes back once more should his forever quarterback in Tom Brady decide to play at age 45. However, should he walk away, Gronkowski is almost certainly going to be a first-ballot Hall of Famer and be in the conversation as the greatest to ever play the position.

Not a bad legacy.