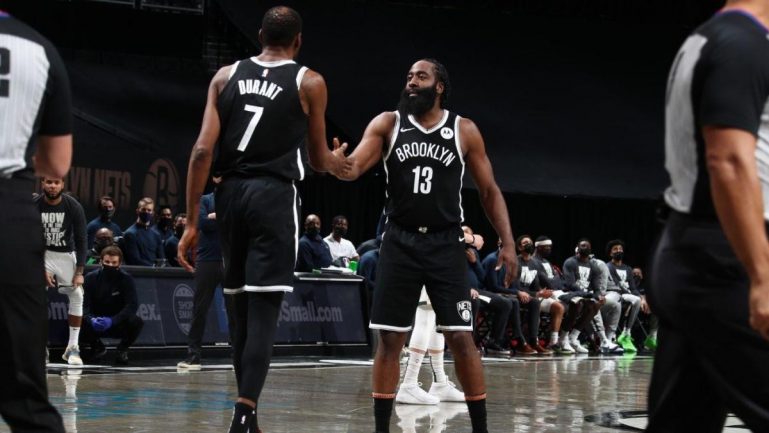 James Harden admits that ex teammate Kyrie Irving’s decision to remain unvaccinated, and thus miss a plethora of Nets games, had an impact on the team.

As such, his trade to the Philadelphia 76ers is motivated by the ability to win titles.

The Brooklyn Nets catapulted themselves to potential title contention when they added James Harden to play with Irving and Durant.

However, fate conspired against them with injuries affecting their time together on the court. Kyrie Irving’s omission from the roster, followed by the ability to only play road games compounded this issue.

Ultimately, what could have been a fearsome Nets Big 3 only played together 16 times. Now, James Harden will endeavor to dovetail with 76ers superstar Joel Embiid.

“For me, it made sense, man,” Harden said. “It’s a time where I needed to be around guys that I know want to win, and know that they are willing to do whatever it takes to win, and the structure here is unbelievable.

“[Winning a title is] the goal, man. That’s the goal. Like Daryl [Morey] said: The opportunity to win is now. Joel is playing the best he’s ever played. So my job is to come out there and help him and help the entire team win a championship this year and in years going forward.

“I think we complement each other,” Harden added on Embiid. “Obviously, the whole world knows how great Joel has been playing — not just scoring with the basketball, but rebounding. He had a triple-double last game. His presence alone is unbelievable”

“Like, obviously me and Ky are really good friends, whatever he was going through, or is going through, that’s his personal preference. But it definitely did impact the team because, originally, me, Kyrie, KD on the court — and winning — covers up a lot of that stuff. But it’s unfortunate that we played 16 games out of whatever it was, and it is what it is.

“Here in Philly is an opportunity, and I’m looking forward to it.”