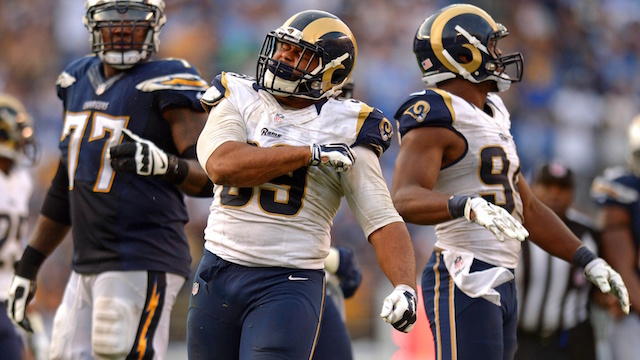 In the hours ahead of Super Bowl 56, chatter sprouted that Los Angeles Rams star defensive tackle Aaron Donald could step into retirement.

Since the Rams captured the championship, the focus has shifted toward Donald’s long-term future, which he has continued to sidestep the conversation. However, the 30-year-old may have finally confirmed that he would continue his career after head coach Sean McVay egged him to answer the question at the Super Bowl celebration parade on Wednesday.

“We built a super team, we can bring the super-team back,” Donald said, igniting boisterous cheers, most notably from McVay via ESPN. “Why not run it back? We can be world champs again!”

Although much could change, it’s quite clear that Donald has a strong interest in trying to win a second straight championship. The Rams are a bit salary-cap strapped this offseason, but general manager Les Snead has a proven track record of maneuvering contracts around to create more financial room.

The Rams’ two biggest free agents will be Odell Beckham Jr. and Von Miller, who expressed strong interest in returning. However, the issue may come with how much Los Angeles can offer.

Meanwhile, Donald is under contract through the next three seasons, making $55 million before contract and roster bonuses. Through his first eight seasons, he’s accomplished it all with eight Pro Bowl selections, seven First-Team All-Pro nods, and three Defensive Player of the Year awards.

The Rams should have an answer from Donald within the next few weeks as the offseason approaches.